This weekend is Memorial Day weekend in the United States. Memorial Day, to those who are unaware, is a solemn day where we honor service members who made the ultimate sacrifice in service to our country.

It is also a day that, to a lot of people, simply means a day off from school or work. Or to others, it’s the “unofficial start of summer”. Marked by trips to the beach or a backyard BBQ.

Since the first shots were fired at Lexington through today, our country has had over 1.1 million service members killed in action.

These are the people who we are honoring this weekend.

I overhear people saying things like “Happy Memorial Day” like it’s some sort of joyful occasion. And don’t get me started on the inundation of “Memorial Day Sales”. I hear and see these “celebrations” and get a little angry because this isn’t what the day is about.

Maybe we’ve conditioned ourselves over time to treat this day as a celebration rather than the solemn occasion that it is.

I mean, all around the world there are terrible things happening. The bombing in Manchester, UK is the most recent of these events. But without resorting to a Google search can you name many others? Probably not, and I don’t blame you. It’s sort of a defense mechanism that we’ve created for ourselves.

To me, every day is Memorial Day

I’m not usually one to rain on someone else’s parade. But this day has special meaning to me on a personal level.

This August will mark the seventh anniversary of my brother’s passing while fighting in Afghanistan. He was an infantryman with the Vermont Army National Guard. He was killed in action along with another soldier while on patrol with his unit on August 22, 2010.

While I have had time to grieve and make peace with what happened, the memories of that day still sting. 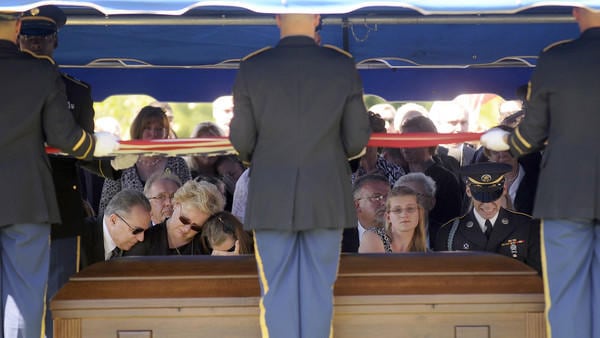 I learned of my brother’s passing while I was also on patrol as an infantryman in Afghanistan.

Shortly after getting the news, our unit began receiving AK-47 and RPG fire from the surrounding village. Despite being a wreck, there were soldiers who needed me to lead them to defend against the short-lived attack. I put aside my personal issues for the moment and continued to lead my soldiers.

After eliminating the threat, I caught a helicopter to Bagram Air Base where hoped I would be able to call home to my family. No luck. Due to the time difference, we were unable to get a confirmation that my wife or parents had received the news. I wouldn’t be able to speak to anyone at home until at least the next day.

The next day I attended a ramp ceremony for my brother where a bunch of high ranking officials, civilians, and foreign service members came to pay their respects. Surprisingly, I was able to hold it together throughout the ceremony. I think I was still in shock, perhaps in disbelief.

I was able to catch the first flight out of Afghanistan that day to start the long journey back home. Two special passengers on that flight included my brother and the other soldier killed just a day before. I took the closest seat to the transfer case that held my brother’s body on the C-130. As silly as it sounds, I sort of felt like I still needed to protect my little brother.

When we landed in Kuwait, I was finally able to call home. My parents and family received notification late the night before and were anxious to know where I was and how I was doing. Surrounded by soldiers, but yet still this was the loneliest I had ever felt in my life. From Kuwait, it is over 6,000-miles to home, with nothing connecting us except a couple short phone calls.

The circumstances allowed for me to move up on the flight list to return to the US, so I left the same day. That was fortunate for me because a number of other soldiers were waiting several days for a flight. The return flight home included a layover in Europe, then a stop in Atlanta. In Atlanta, returning soldiers are usually greeted by supporters, which on any other day would have been a pleasure. That day though I didn’t want to talk to anyone – I didn’t want to be thanked for my service or even acknowledged for that matter. I considered ditching my uniform and buying some civilian clothes for the rest of the trip home.

If I thought the attention in Atlanta was bad, it was nothing compared to when I finally landed at home in Connecticut. There were reporters from every local newspaper and television station at the airport and in front of my parent’s house. My initial thought – and what I was conditioned to think about the media – was “F” those people (to put it lightly). The disbelief I had, was turning to anger at people were just doing their job and who I had no reason to be angry at.

But then I thought if someone doesn’t talk to the media about my brother, how will anyone know who he was? Will his memory die too just because I was too stubborn to speak with the media?

Tone down the celebration

Why I’m writing this today is to ask for your help. If you’ve read this far, I’d like to ask that you use Memorial Day to honor the memory of the men and women who have paid the ultimate sacrifice for our freedom.

I don’t care what your feelings are about war no matter where on the spectrum you fall. Whether you think we should nuke our enemies or are on the side of appeasement, I’m glad you are able to have your opinions and can be vocal about them. I certainly enjoy that freedom.

Regardless of your position, please understand that the service members killed are real people. They have real families. They had dreams for their future.

The United States did away with the draft after Vietnam. That means that every single service member killed after that time did so knowing what they signed up for and did so voluntarily. For that, I think we owe a great deal of gratitude to those who did not make it back to their loved ones. Regardless of whether or not someone volunteered to serve, we still owe them our thanks for doing what we, as a country, asked of them in our time of need.

Gratitude on Memorial Day should be reserved for the service members who are no longer with us. As a Veteran, I’m used to being thanked for my service and usually I appreciate it. On Memorial Day though I don’t want to hear it. It’s like nails on a big ass chalkboard. That day is not about us – we’re still here – and thanking us on Memorial Day just stings. It’s like taking credit for something you didn’t earn.

But, please take a moment this weekend to honor those who sacrificed so much so that you may be free. Remember this as a solemn occasion, and pray for them and their loved ones.