My Lightning Talk at PressNomics 5 is called “Bite Sized Challenges”. It’s focused on how to build the mental strength to take on big tasks. Those seemingly impossible jobs that would take several of you to accomplish.

Getting up in front of a room to speak with as many influential people in it is a challenge for me. It’s something I’ve never done before.

Another challenge I made for myself was to do 50,000 pushups and situps this year.

I couldn’t possibly do all 50,000 at once, but I also wouldn’t be very successful if I didn’t break this enormous challenge down into bite-sized chunks.

I need to know how many I have to do each month, each week, and each day in order to hit my goal. If I miss even just one day I know I have even more work to do tomorrow to catch up.

Every morning before I take a shower I’ve done 150 pushups and situps – that’s more than enough to hit my goal. Before I have even started the day, I’ve accomplished something. That sense of accomplishment is motivating, and it helps me get hit the ground running when I step into the office every morning.

I also keep a spreadsheet that helps me keep track of how many I’ve done. Without visualizing the information I’d likely get lost. Maybe that’s just me. 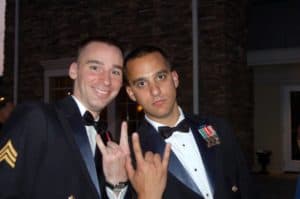 The biggest challenge I had while in the Army – or really at any point in my life was on August 22, 2010.

That day we were raiding a village in Northeast Afghanistan while looking for Taliban fighters that were in the area. At one point I heard on my radio that the commander was looking for me.

I got nervous and started checking all of my soldier’s equipment. I thought someone had lost something important. Everyone had everything so I couldn’t imagine what was wrong.

When I finally caught up with the commander he gave me some of the worst news I had ever received.

My brother, who was also in Afghanistan less than 100 miles away, was killed in action. Naturally, this news came as a shock and I was an emotional wreck.

But, the story – and the challenge – gets worse.

Just minutes after receiving the news, our unit started receiving RPG and AK-47 fire from the fighters in the village.

I was going through the two biggest challenges in my life all at the same time. In order to be successful – in order to survive – I needed to put my brother’s death out of my head for the time being because I had soldiers who were depending on me to point them in the right direction.

Granted, they were very big bites, but I had to break down the day’s challenges and prioritize what to focus on first. Focusing on the loss of my brother could have caused me to make a mistake, and I knew that wasn’t an option.

What It Means To Have “Grit”

But these soldiers weren’t born with a unique ability to be “gritty”. Grit is something that’s learned when you go through tough times.

Ingrained in every soldier is the mindset that you either succeed or you die. You move faster or watch your buddy die. This is taught from day one in basic training.

When I was a soldier, I learned to become “gritty” through the mind tricks I was put through. For example, we’d go out on runs with no known distance. We would run for a while and when we finally got back to the point where we started, the leader of the run would yell back “good job, one lap down”. Many people would quit because they already mentally checked out, convincing themselves that the finish line was in sight. Those who stuck with the run would get to stop a short distance later. Those who dropped out were assigned extra duties.

We would rappel off of a three story tower. While gravity does most of the work, if you’re afraid of heights, gravity won’t swing the first leg over the edge.

We would walk with over 100 pounds of equipment on for miles. But if we thought of the weight or the distance we’d likely psych ourselves out. The task is thought of as moving your equipment one mile at a time. After each mile, you’ve accomplished something.

Accomplish something every day

I am challenging myself to do 50,000 pushups and situps this year.

Find something that is a challenge for you to do, yet is not so difficult that you quit after a day or two. Make it something that you need to be intentional about doing, and not something you do already do every day. Those accomplishments will help motivate you when you start each day.

Here are some examples of ways you can challenge yourself to accomplish something every day.

Failure Can Be Motivating

When Michael Jordan was in high school he didn’t make the cut for his basketball team.

After finding out he didn’t make the cut, he went home, locked himself in his room and cried.

That pity party didn’t last long, though. He turned the failure into motivation. When he would get tired from working out or practicing, he’d close his eyes and see that team roster hanging in the locker room without his name on it. That motivated him to get better.

Dealing with failure effectively allows people and companies to become stronger. Failure can make people more resilient and confident, by teaching them that they can prevail even when the odds are stacked against them. It’s really all how you handle failure in your own head.

That’s Me – What Are Your Challenges?

What are your biggest challenges? How are you handling them?